skip to main | skip to sidebar

A New Member of the Family 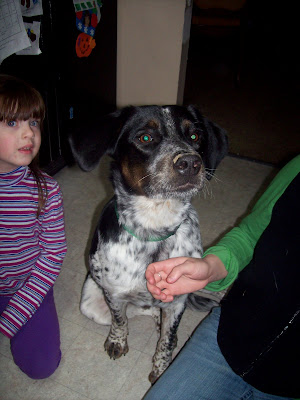 This is our new kid---Cody!
He is a real doll. Shane and I met him a week before Christmas and had him delivered Christmas morning. The kids were thrilled. Tanner kept walking around saying he was dreaming! Cody is 11 months old and house-trained (a major plus). I swore we wouldn't get another dog until all the kids were out of diapers, but Cody was too good to pass up. 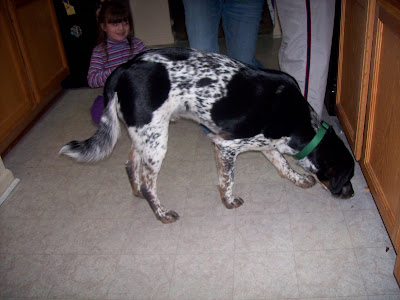 Supposedly, he is part Austrialian shepherd and blue heeler, but we think he has setter and pointer in him because of his markings. He belonged to Jessica's friend Aaron at school, but Aaron's family is pretty grown up and they were gone all day at work and school leaving Cody in a crate a lot of the time. So, they decided to look for a home where Cody would have lots of kids to play with. They found the right place.
The first few days were pretty rough, especially Christmas night. Cody paced through the house, not knowing where he was supposed to be. Eventually, he laid down and relaxed a bit, but he was up 3 times in the night. Jessica has decided that he must sleep in her room and that has been great. She lets him out in the night if he needs it and first thing in the morning she takes him to the backyard for a long game of fetch! He has tons of energy and loves to run after anything you throw for him. He's still got a bit of puppy in him and chewed up a "Pokeball" that Hunter got for Christmas. (Hunter is still not over it and wouldn't you know Meijer is out of them so I haven't been able to replace it!) Cody buries his rawhide bones and tonight during scripture time he came running into the living room with the bone he recovered from under a tree in the backyard. It was a bit dirty. I had a hard time concentrating on the scriptures between Jared kicking a soccer ball (and then cheering for himself) and watching Cody toss his bone in the air and try to catch it!
So, the chaos of our home has moved up another notch.....oh and did I mention Santa brought Tanner a set of drums!!!!!!!!!!!!!!! 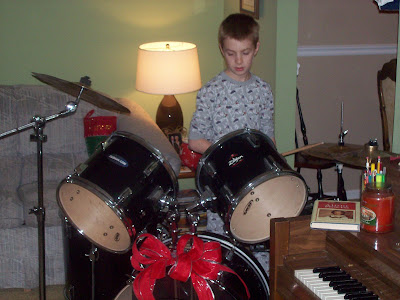 The gift you left on the front seat of our van was over the top! Thank you and God Bless!
Maura, Shane and the kids 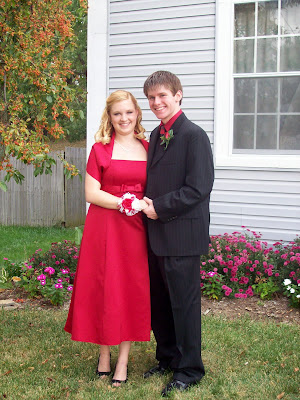 I've been slacking on blogging. Here is Jessica and Michael before the Homecoming Dance. 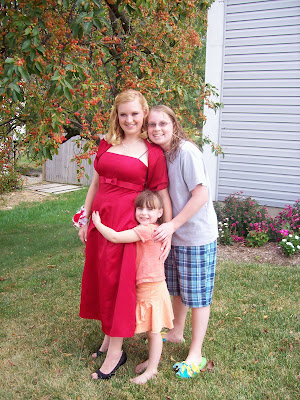 and here are my 3 girls. Jessica, Savannah, and Mikayla.
I sure love them!

Posted by Pampered Princess at 10:16 AM 3 comments 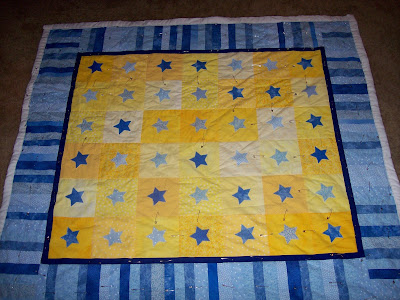 This picture is for you Grandma Martin!!! I finally learned how to put pictures on my blog using this computer. I'm hand-quilting this using a large wooden hoop, so you can still see I have large safety pins all over it. I've finished a lot of the stars and a lot of the yellow blocks. I haven't decided how I want to quilt the stripped border. The white edge is temporary to protect the edge until I'm ready to bind it. I'll probably bind it in bright yellow, maybe dark blue.

When my mom and dad were here to visit in October, I showed the quilt to my dad and he asked me what I was going to do with it when I was done. I told him I was "giving it to myself". hee hee. I just love the colors and it makes me happy everytime I work on it.

Posted by Pampered Princess at 10:04 AM 4 comments 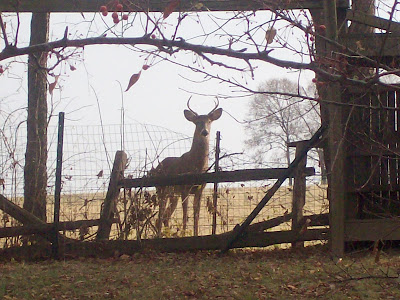 I was working on a Christmas present in the dining room and decided I needed more light. I threw open the curtains and saw this beautiful buck behind the back fence. He was just looking over the fence next to the old tree house!!! I went out the back door and took his picture. That startled him and he ran away.

Later, Jared pointed at the window and yelled "DEER!" No. There wasn't another deer. Just great imagination. It was a fun way to start the day.

Posted by Pampered Princess at 9:49 AM 2 comments 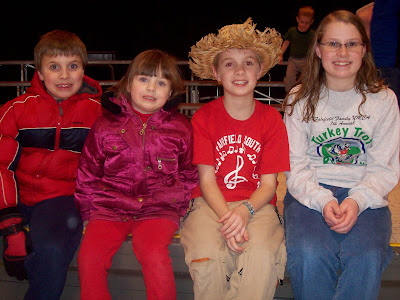 Hunter, Savannah (looking strangely dazed!), Tanner, and Mikayla on the stage after the performance! 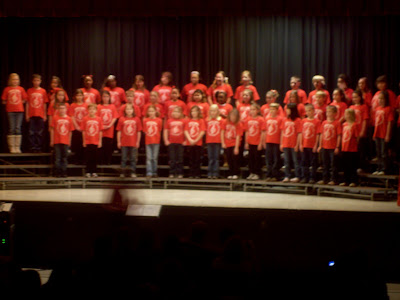 Tanner is in the second row, 4th kid from the left. I know....we couldn't pick him out either! :)


Tonight we went to the elementary school for Tanner's 4th Grade Chorus Concert. It was really nice. They sang 4 Christmas songs and a Hannukah song. My favorite was "Christmas is Coming and WE are Getting Fat"!!! It was a funny commentary on the overeating some of us do during the holidays. I loved the line about waddling up the stairs after Thanksgiving dinner!

I'm so psyched! One of my favorite friends has joined the blogging world. Some of you know her as Kim Whiting. Here is a link to her brand new blog!!!!